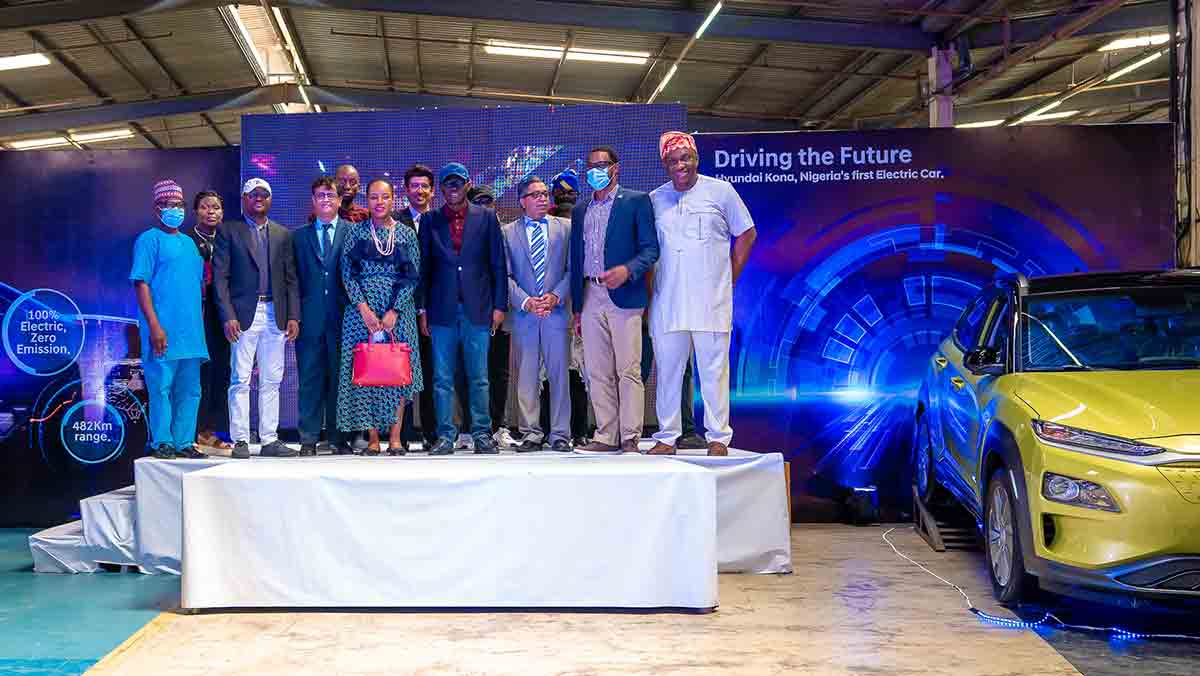 Posted at 20:57h in Blogs by stalliongroupadmin 0 Comments
0 Likes

In his welcome speech the manageing director of Stallion VON Mr. Manish Rohtagi appreciated the government for always being forward thinking for the greater good of Lagos and encouraging sustainable means of operations making the state future ready. The LASG teams advocation of the first locally assembled electric car in this plant further adds to the vision for a greener and eco friendly Lagos.

The brand head Mr. Gaurav Vasisht further added that Hyundai Kona is a stepping stone towards a greener Lagos. The question often asked is are we ready for Electric Vehicle in Nigeria? I am asking “Who says we are not ready?” “Making it affordable and accessible will see most Nigerians adopt in the new normal in today’s time. It will be great to simply charge my car at home like a mobile phone and drive around at no fuel cost. Kona offers just that ease to the consumers. The first electric SUV from Hyundai, the Kona can go up to a range of 482 km with an acceleration of (0-100kms) in 9.7 seconds on a single battery cycle of a capacity of 64 KWH. The ease of charging is unmatched and can be plugged in at home or work for 9.35 hours for a full battery. Its 100% electric with zero carbon emission. KONA Electric is here to change the way people think about going electric.

Global interest in climate change and its effects on the environment and society more broadly, is at an all-time high. Specifically, with the unpredicted pandemic of COVID-19, more countries are increasingly acknowledging the shift that’s needed from a fossil fuel-driven economy to one that is sustainable, green and attempts to mitigate climate change.

Hyundai Motors Nigeria, recognised this paradigm shift in the transportation sector by bringing in electric mobility that is a step towards the same goal. For a developing country like Nigeria, not being discouraged by the infrastructural challenges, Stallion plans to launch the first ever Electric Vehicle (EV) in conjugation with Hyundai to embark on the attitudinal change for a clean environment.

Running Costs
Another factor that will grease Kona’s wheel of success in the country is the car’s running cost, which is quite minimal. That will be more so in Nigeria, where electricity consumers resident in accommodation categorised under R1 are charged only N45 per kilowatt.
That implies Hyundai Kona owners would incur only N3300 for a full charge that will do a running of 482 kms, if he or she plugs the car into public power supply. The charging is also as simple as getting your mobile plugged in at your home or office electrical socket.
The ease of charging is unmatched and can be plugged in at home or work for 9.35 hours for a full battery charge and the power consumption for full charging is 143 WH/KM (68.926 kwh for 482km). Besides the Hyundai Kona’s electric power-packed performance for providing a thrilling driving experience it also manages to excel with its charging kit capacity of 2.3KW, with a voltage of 230V and frequency of 50Hz. The styling of the vehicle is conventional, the interior is luxurious, and the ride is nearly silent.
Kona electric has been extensively applauded for its class driving range, safety convenience features and fast-charging capability. Its success can be measured by the following; In April 2020, it was named the Best Small Family Car by the inaugural TopGear Electric Awards based on its 24-hour (1,600-km) performance. This year, U.S. News & World Report named it the Best Electric Vehicle. WardsAuto included KONA Electric on its 10 best engines list. In 2018, Auto Express named it the Affordable Electric Car of the Year. The EV also played a role in the KONA nameplate winning Spanish newspaper ABC’s Best Car of the Year award. It also won the 2019 North American Utility Vehicle of the Year.

While EVs may have had a checkered past, there is still an unanimity amongst auto industry leaders and analysts that a tipping point is approaching where mass adoption will become inevitable. These factors have come together to force the traditional industry to take electrification seriously — faster than we had previously expected.